We've received information that over the next few days, MSA management will be approaching you in person and asking you to sign a document titled MEMORANDUM OF AGREEMENT FOR REIMBURSEMENT OF SPECIALIZED TRAINING EXPENSES. MSA plans on presenting this agreement in an upcoming settlement conference in federal court. Their plan is to attempt to convince the judge that because we signed an agreement for $18.75 an hour for training, their back pay liability should be at that rate as well.

MSA is also using these agreements as an attempt to satisfy section 7(g)(2) of the Fair Labor Standards Act. Section 7(g)(2) of the FLSA allows the employer, pursuant to a bona fide agreement, to compensate canine handlers at a different regular hourly rate for canine care and time and one-half of that rate for canine care duties performed during overtime hours. A bona fide agreement to pay in accordance with the provisions of section 7(g)(2) may be made on an individual, group, or collective bargaining basis. Because MSAs canine handlers have elected a union, any attempt to have employees sign an individual agreement would be a violation of the FLSA.

MSA is not allowed to directly deal with employees or make unilateral changes concerning employment and they're fully aware they're violating section 8(a)(5) of the National Labor Relations Act. We will be taking legal action against Glen Kucera and MSA for these actions.

To our fellow handlers,

Several operational IEDs have been mailed to political figures and news organizations throughout the country.

Please stay safe and keep your head on a swivel. 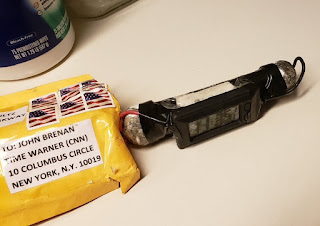 A Letter to Glen

Below is a copy of a letter sent to Glen Kucera and Tim Coon, MSA's legal representative.

As you know, the United Federation of K-9 Handlers (“UFK9H”) has been certified as the collective bargaining unit for all full-time and regular part time K-9 Handlers employed by Michael Stapleton Associates Ltd. (“MSA”). MSA must collectively bargain in good faith any change in existing terms of conditions of employment. See NLRA § 8(a); Litton Fin. Printing Div. v. NLRB, 501 U.S. 190, 198 (1991) (“[A]n employer commits an unfair labor practice if, without bargaining to impasse, it effects a unilateral change of an existing term or condition of employment.”). That duty commenced no later than the certification of UFK9H; arguably, it commenced when UFK9H received a majority of the votes cast in the representation election. See NLRB Operations Memorandum 06-89 (Aug. 31, 2006), found at 2015 WL 7385121.

This view is supported by Second Circuit case law. In NLRB v. 675 West End Owners Corp., 304 Fed.Appx. 911 (2d Cir. 2008), the court held that an employer who hired a subcontractor after a union election to perform work that had previously been done by employees had violated Section 8 of the NLRA. It stated that “absent compelling economic considerations for doing so, an employer acts at its peril in making changes in terms and conditions of employment during the period that objections to an election are pending and the final determination has not yet been made … the Companies’ unilateral decision to subcontract with Command Security, which occurred after the date of election, is therefore a violation of sections 8(a)(5) and (1) of the Act.” Id. at 915 (citations and internal quotations omitted).

It would be an unfair labor practice for MSA to unilaterally change the terms and conditions of the employment of the members of the bargaining unit. Accordingly, if MSA intends to change any terms and conditions, it must negotiate such changes with UFK9H. UFK9H intends to bargain in good faith and expects MSA to do the same. If MSA chooses not bargain in good faith, UFK9H will pursue all available remedies.

We are well aware of what MSA is doing and it is being addressed right now. The United Federation of K9 Handlers will always have your best interest in mind. We will post updates as they become available.