Tomorrow will mark one week since our fellow handler, Seamus Fennessy, surrendered his partner Mattie to MSA. Since then, there has been an outpouring of support for Seamus and his family. On Friday afternoon, Senator Sam Thompson of New Jersey's 12th District wrote a letter to Mike O'Neil and Glen Kucera in support of Seamus. You can find the news story regarding the letter and comments from Senator Thompson here. He has yet to receive a response. 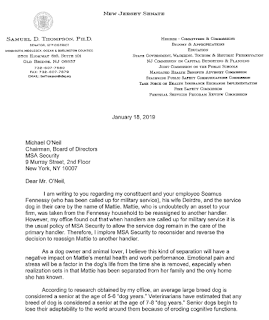 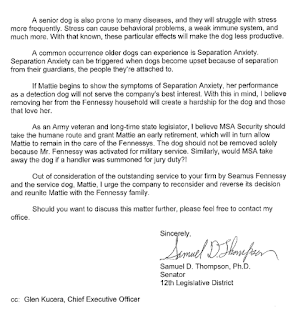 We've also received confirmation that Senator Thompson has reached out to Governor Phil Murphy's office, briefed them on the situation, and discussed possible actions this afternoon. Senator Bob Menendez, a staunch supporter of animal rights, has also been in contact with the Fennessy family and has conveyed that they "have his office's full attention."

Glen, we have a challenge for you. If you truly want to fix this, do not surround yourself with the same yes men that were the cause of all these problems in the first place.  These are the same people that claimed they didn't have to pay us overtime, the same people that claimed they were in compliance with the SCA, and the same people who have ruined our relationships with the clients. Talk to the handlers who are reservists, get their opinion on the matter, then develop a policy that proves MSA is as military friendly as it claims. You could even go one step further and sit down with us and discuss a plan that would apply to all handlers and their partners if they choose to leave MSA. Better yet, work with us to make MSA a company that handlers won't want to leave in the first place.

No matter what, do not rely on business as usual this time. Do the right thing, reach out to Seamus and his family, and make this right. 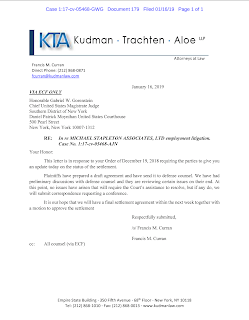 I am hoping this will find all having a happy and healthy New Year. As the New Year moves forward, we will also be moving forward with negotiations with MSA to get a contract in place. We've been in communication with MSA's lawyers and are working on establishing a set negotiation schedule. The following links are current charges filed against MSA. Case 29-CA-230696 are the charges we filed in response to the reduction of the expense stipend and the implementation of the Canine Home Care Policy; both of which are mandatory subjects of bargaining under the National Labor Relations Act.

The lawsuit is still awaiting finalizing and signatures. The government shutdown has hampered this process. It should move forward by the end of the month. A status update on the settlement agreement is due to the court on January 16th and the motion for approval of settlement is due from both parties no later than February 22nd. 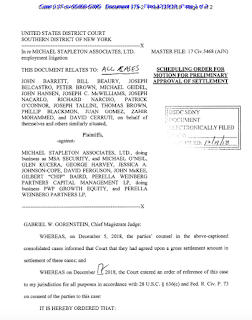 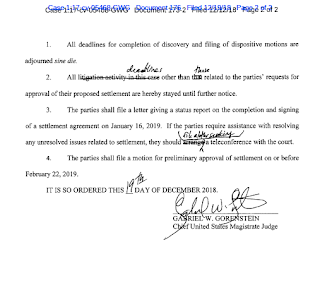 I would also like to inform you about a New York handler, Seamus Fennessy, who has recently been called to active duty. MSA has been adamant about taking his seven year old partner even though he is able to work part time while on active duty. His petition currently has over 3500 signatures and his page has over 1100 likes. It seems MSA only considers our partners family members when they're being interviewed on national television. Please like his page and share it when you have time.

Finally, I would like to thank all of you for your patience over the last few months. Right now progress is slow, but there is progress. In the coming months, we hope to see the court ordered reinstatement of the $400 stipend, a fair negotiation of the Canine Home Care Policy, and a vast improvement to working conditions all across the country. Eventually, MSA will realize our goal is not to harm the company but to ensure that handlers are compensated fairly and treated with respect. MSA was once a great place to work. Soon, MSA will be great again.