Letter from an Anonymous Handler

"Toxic leadership is a combination of self-centered attitudes, motivations and behaviors that have adverse effects on subordinates, the organization and mission performance. The leader lacks concern for others and the climate of the organization which leads to short and long term negative effects. The toxic leader operates with an inflated sense of self-worth and from acute self-interest. Toxic leaders use dysfunctional behaviors to deceive, intimidate, coerce or unfairly punish others to get what they want for themselves". Forbes Magazine

The above quote is taken from an article written about the U.S. Army, but it captures exactly what has happened at MSA Security and the kind of leadership we have been subjected to as employees. If I have to read one more time that MSA can't discuss it's canine policies because it is a matter of national security, I think I'll vomit. They discuss the policies when it suits them, when they are sitting on a sound stage with Megyn Kelly, but they go radio silent when confronted with a simple question about Mattie. We all know that the decision to send Mattie to Texas was vindictive and an attempt to hurt Seamus and his family more. What kind of treacherous person working at MSA makes that call? Glen? I would think it has to be Glen and he makes all the decisions now, no matter how cruel and destructive they may be. What happened to those great leaders we had from law enforcement? They sit on their hands while a CEO with no law enforcement/military/security experience runs roughshod over us. It really is sickening, but it gives us a clear picture of what happens in the executive suite at 9 Murray, and shows what a dim view they have of us. I don't think I would be going out on a limb by saying the owners of MSA Security, PWP are very smart people - highly educated, but are they completely blind to the reality that is MSA Security now? Doesn't one owner ever think how bad the optics are on taking Mattie away from a combat veteran and his family, telling him to shut-up and maybe he'd get her back and then twisting the knife by sending the dog to Texas? Let's not kid ourselves, the only reason Mattie was shipped off to Texas was to punish Seamus because he stood up for himself and his family and he believed that MSA was capable of doing the right thing. After a few tours downrange with bad guys shooting at him, it was not likely that Seamus could be bullied by Mike and Glen, but they tried their best. I think at one point they even told him to "get control of your wife". Very sad. Why wouldn't PWP call Glen and Mike and all the executives and directors at MSA and ask a very simple question "What the hell is going on"? "How did we get to this point"? That is what a company that cared about it's employees would do. Perhaps PWP only cares about money - and as long as MSA brings money in, they have no regard for the employees, the dogs and the once great reputation MSA enjoyed.

Glen and Mike you had a chance with Mattie to be generous, kind and magnanimous. You should have allowed Mattie to retire. It would have sent a message to all of us that it was time to heal, time to move forward, time to work together in the best interests of MSA Security. Instead you took this as an opportunity to be petty, harsh, cruel and vindictive. Your ego and arrogance, your contempt for us was never more obvious. You lost the Union fight, you lost in court so you decided to use Seamus as an example, to show us just how tough you are, but you only demonstrated how weak you really are. Business as usual at MSA Security. We know the truth and now the public and our clients are beginning to know the truth and see MSA for what it really is. Let's see what happens May 1st, and if anyone from PWP has the courage to come down from their office and hear what we have to say. Bring Mattie Home. UNION - count me in!
at 4/23/2019 06:16:00 PM No comments:

Tonight at 6pm, PIX channel 11 news will be airing an interview with the Fennessy family about their upcoming protest of MSA's newly adopted unwritten and unseen policy of separating senior dogs from dedicated handlers. The protest will be held on May 1st from 11am to 3pm outside Perella Weinberg's headquarters at 767 5th Avenue (the GM Building) in New York City. All handlers and family members are encouraged to attend.

Demonstrations against work policies are considered protected concerted activity under the National Labor Relations Act. We will file charges against MSA for anyone who believes they were targeted or retaliated against for attending.

We've also been asked to provide the complete letter that was written to Mike O'Neil by Seamus Fennessy that is quoted in the following article. It's a powerful letter that we believe expresses the frustration many MSA handlers experience. 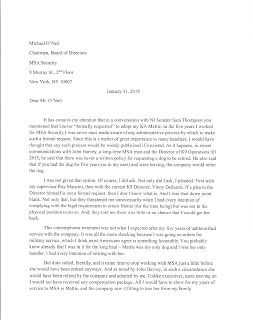 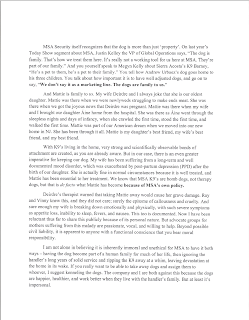 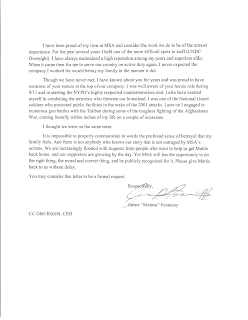