Another Message to Glen Kucera

From now on, our letters to Glen will be sent directly to his MSA email account. If he decides to respond, we will post it here unedited. We doubt there will be any response because Glen likes to avoid having to present facts or evidence to back up any of his claims. Also, we're sure his "very expensive" lawyers will advise him not to have an actual constructive dialogue with us because that might allow everyone to come to a mutually beneficial agreement and understanding. This is something Glen has no desire to accomplish because it could cost him money.

He's stated in his previous letters his disdain with the idea of negotiating with disgruntled ex-employees. Disgruntled is a harsh term. Why does he never mention that they were integral in the operations of MSA after September 11th and were held in high regards by everyone who worked with them? More importantly, why doesn't Glen ever mention the three disgruntled current employees that he and the rest of management avoid at all costs that will also be involved in the negotiations? If Glen has been formulating plans to make all of our lives better, why won't he implement any of them unless you vote no? That sounds an awful lot like a hostage situation.

Glen has mentioned in the past that he's not legally allowed to change anything right now because of the union election. This isn't true at all. Glen is assuming that if he actually tries to make things better, we will file unfair labor practice charges with the NLRB. In reality, Glen could implement any ideas he had before the union petition was filed (March 12th 2018) without fear of charges being filed. National Labor Relations Board precedent permits an employer to implement a change it had firmly decided on before an election, even if in the interim its previously unrepresented employees have elected a union. This precedent preserves a nonunion employer's unconditional right to make firm decisions regarding its work force without the risk of future unionization negating those decisions (Camvac International, 288 N.L.R.B. 816, 818-819 (1988)). Could we file charges for ideas he's had after March 12th? Of course, but the only reason we would file these charges is if Glen decides to make everything worse for all of us as a retaliation tactic. Could Glen give us all a raise to $35 an hour? That'd be great! Could he raise our monthly stipend to a reasonable amount? Absolutely! What about obeying labor law and paying us for at home maintenance of our K9s? Damn right! Honestly, we wouldn't say a damn thing about it because it's what every handler wants. If Glen can make all these changes right this very minute, what is stopping him? That's easy! He has no desire to make any changes and is holding us hostage by telling us he won't negotiate with us and that he is our sole savior. Do us all a favor Glen, stop thinking about how to make MSA better and just do something.

If Mike O'Neil and Glen Kucera had plans to improve our quality of life before the petition was filed and are legally able to implement those changes now, why would they hold those plans over our heads and only enact them if we vote against the union? It's because they never had any plans to improve MSA and they have no desire to change anything in the future. If we're wrong, send everyone your plans for making MSA a better place to work.

Glen likes to say a union is a "worst case scenario" for the handlers at MSA. It seems like the consensus is that it really can't get any worse. More and more senior handlers are leaving every week. We continue to be called into the office to be attacked by management for no reason and without representation. Certain handlers are receiving pay cuts and are told it's because MSA "is getting ready for the union." Why are we being used as an excuse for you to retaliate against handlers Glen? Why can't you just be honest with everyone and admit it's because you want a bigger bonus? If we're wrong, send everyone your employment agreement to prove it.

Glen has no desire to negotiate for one simple reason, money. The management at MSA has claimed that the idea of unionization has caused the companies value to drop thus preventing a sale by Perella Weinberg, the true owners of MSA. They know that if a union is not voted in, another petition can not be filed for a full year. This gives plenty of time for Glen to facilitate a sale of MSA and, if his employment agreement is similar to ones he's had in the past, make off with millions in bonuses. Below is a copy of Glens employment agreement from his last job that he was fired from for falsifying the value of the company to get a bigger bonus. 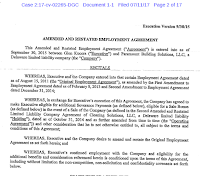 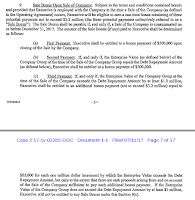 The hiring of Glen Kucera raises quite a few questions. Such as where is Mike O'Neil and why isn't he sending out letters like this? Why was Glen hired in the first place if he has a history of financial negligence? Who actually hired Glen? Mike O'Neil is the the only one above Glen but are we to believe that Mike couldn't find a single member of law enforcement or the military that would have taken the job? Why would Mike hire a former CEO of janitorial service companies from Arizona that specializes in cleaning the floors of car rental facilities that was fired for misconduct to lead one of the most elite security companies in the world? Is it possible that Mike no longer controls anything at MSA and Glen Kucera was installed as a fixer by Perella Weinberg to ensure they get the maximum profit from a sale of the company? Maybe Mike O'Neil could write us all a letter answering some of these questions.

If any of you are unsure about why MSA needs a union, just ask any handler that has been around for awhile. Listen to the stories of MSA retiring handlers dogs only to take them away and give them to strangers as revenge. The stories of handlers being ordered to come back from vacation early to work and are then "laid-off" if they refuse. The hundreds of stories about the "If you don't like it, quit" policy of management.

MSA is dying. The turnover rate is atrocious and longtime handlers are leaving at an increasing rate. Fifteen years ago it was a company that respected its employees more than almost any other company in the country. Now it treats us like garbage and expects us to thank them for it. If you're going to advertise us as the best, we should be treated like the best. If Mike and Glen have any interest in saving MSA, they'll sit down with us after the election and talk about what needs to change.

One final thought for Glen. Next time you feel the need to write another letter devoid of facts, evidence, or information do us all a favor and use that energy to actually do something.

P.S.
The vote totals in Glens letter are incorrect. The actual count is on the official US Government document below. It's just another example of us providing hard evidence to prove Glen wrong. 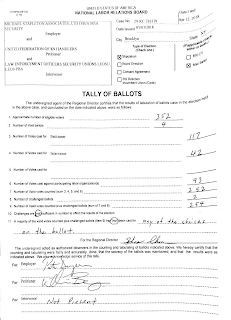