As many of you are aware, Glen is still sending out letters. The man who claims to have your best interest in mind has reminded everyone that he owns your dog. Sure they're attached to us almost 24 hours a day, spend vacations with us, and have become a part of our family but Glen wants to make sure that you know they're his dogs. Can Glen issue the command to confiscate over 350 dogs from Veterans and Police Officers? Yes, he can. Would he? Well that depends on the kind of person Glen is. If he thinks it's in MSA's best interest to refuse to negotiate with us and instead end up on the front page of the NY Post for all our clients to see, then I pity him.

The last thing we want is for MSA to lose business or go bankrupt. Could we inflate a giant rat outside of several of MSA's clients in downtown Manhattan? Of course, but we choose not to. If MSA loses clients, we lose posts and hours. Let's get serious for a moment. If we were to strike, MSA would have a few things to do before it could start to fill posts.

We've said it from the beginning, we have no desire to strike. It hurts the clients which will ultimately hurt the handlers. Does that mean it could never happen? Absolutely not. MSA is defending itself in court against several labor lawsuits. If they made some of the changes we've requested, it would actually limit their total responsibility for payment of back wages.

"All they can do is ask for things and hope MSA agrees." Does that sound like an employer that is bargaining in good faith? I didn't think so. Contract negotiation is exactly that, a negotiation. Believe it or not, it is actually mandatory for Glen to negotiate with us on many subjects. The National Labor Relations Act has this to say...

Required subjects of bargaining. The duty to bargain covers all matters concerning rates of pay, wages, hours of employment, or other conditions of employment. These are called “mandatory” subjects of bargaining about which the employer, as well as the employees’ representative, must bargain in good faith, although the law does not require “either party to agree to a proposal or require the making of a concession.” In addition to wages and hours of work, these mandatory subjects of bargaining include but are not limited to such matters as pensions for present employees, bonuses, group insurance, grievance procedures, safety practices, seniority, procedures for discharge, layoff, recall, or discipline, and union security.

Duty to bargain defined. An employer who is required to bargain under this section must, as stated in Section 8(d), “meet at reasonable times and confer in good faith with respect to wages, hours, and other terms and conditions of employment, or the negotiation of an agreement or any question arising thereunder, and the execution of a written contract incorporating any agreement reached if requested by either party.” What constitutes a violation of Section 8(a)(5). An employer, therefore, will be found to have violated Section 8(a)(5) if its conduct in bargaining, viewed in its entirety, indicates that the employer did not negotiate with a good faith intention to reach agreement. However, the employer’s good faith is not at issue when its conduct constitutes an out-and-out refusal to bargain on a mandatory subject. For example, it is a violation for an employer, regardless of good faith, to refuse to bargain about a subject that it believes is not a mandatory subject of bargaining, when in fact it is.

Link to the NLRA guide.

I highly doubt the union and MSA would not come to an agreement during contract negotiations. We're not asking for anything that is so outrageous that MSA could not negotiate with us. Several of our demands, such as training time and reimbursement for expenses, would bring MSA into compliance with Federal labor law. Something that benefits both us and MSA.

Glen seems to enjoy threatening to reduce or remove benefits. Why would you think about taking away our benefits Glen? Are the points we've brought up that outrageous that it would necessitate taking that away? I challenge you to find a handler that doesn't submit an expense report for well over $400 every month. Is requiring contracts to have provisions for heat, AC, and fresh water for the dogs an impossible request? Is covering the medical costs of dogs injured in the line of duty too much to ask? Are pay raises based on our performance that hard to imagine? It's not so hard if you try Glen.

Glen is right, there is no time limit to negotiations. Glen has reportedly told a few of you at the Staten Island Ferry that he has "very expensive lawyers" and that he could "drag it out for years." That's ok though, he has our best interests in mind. He does mention MSA might want to implement changes on its own but can't if there's a union. The effort to unionize MSA started in July 2017. Has our quality of life improved at all since then?

In his time at MSA Glen has...

Unfortunately, Glen is under the assumption we have no understanding of the law. Yet every claim we make is backed up by a link to an official US Government website or document. Glen's claims are backed up by his signature at the bottom of his letter. Glen also claims we are adversarial. If he's hurt by the documents we've posted regarding his past then I suggest he make better choices in the future. Mike announced the hiring of Glen on October 4th 2017 and said Glen "successfully managed two service companies, Paramount Building Solutions, Inc. and GCA Services Group through periods of rapid growth." Do you think informing us that both these companies sued Glen for damages is information we're entitled to? What about that he was fired from GCA for "gross financial negligence" before bankrupting the company? Glen may be hurt by this information but that does not mean we're not entitled to know the background of the man who's now "acting in our best interest." To be fair Glen, it was "adversarial" to implicate us in several crimes in one of your early letters. 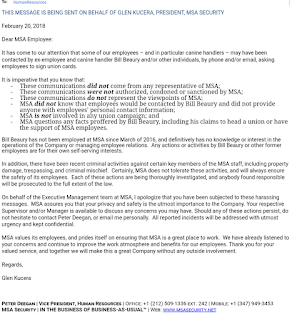 Like we stated earlier, we have no desire for MSA to lose business or go bankrupt. However, we do believe MSA has the substantial ability to improve the quality of life for its employees. We also believe Glen will receive a substantial bonus based on the valuation of the company when it's sold. Keeping labor and benefit costs low would increase the valuation of the company. If this is untrue, Glen and Mike can simply make their employment agreements public to prove they are acting in our best interest or they could go back to burying coffee cans full of cash in their backyards.
at 4/09/2018 09:28:00 PM