First I'd like to thank our brothers and sisters in the Chicago area that chronicled the adventures of Glen Kucera and Keith Mulcahy in the windy city. Hopefully they were able to try some deep dish pizza. By all accounts, it would have been their only accomplishment there.

Next we'd like to address Steve Maritas. We waited until today to address his constant emails and text messages for a simple reason. We wanted to see how MSA would respond to his claims, reputation, and the overall idea of having him involved with their business. As far as we're aware, MSA hasn't responded at all. How could that be? I could understand the silence if all of Glen's emails were directed at both unions interested in representing the handlers but the letters had a distinct pattern. Namely, the "two disgruntled ex-employees" named Bill Beaury and Joe Nacarlo. If MSA has such an important distinguished reputation to protect, why would it focus its energy attacking retired members of the NYPD Emergency Service Unit instead of a man with a questionable record who never served in the military or as a law enforcement officer? That seems like a strange thing for Glen and MSA to decide to do. Perhaps Glen has had a conversation with Steve and they've reached a mutual understanding?

Steve was involved in the initial organizing effort at MSA. He desperately wanted the ability to advertise the fact that his union was the one that finally organized MSA. He needed the ability to advertise that he represents an organization comprised solely of retired Police Officers and Veterans. He quickly realized he was in over his head. After a few weeks of being rejected by handlers who had researched his background, he decided to abandon the effort. Suddenly, Steve resurfaces after our petition for an election is filed with the NLRB. He offers to affiliate with us if we would pay him $3 per handler in the union. We outright refused. None of us wanted to be involved with a person with his background. This upset Steve quite a bit. So much so that he proclaimed "the problem is that they're cops... dickheaded, stupid guys."

Steve has quite the compromising background. Could Glen Kucera and MSA really be that desperate that they would make a deal with Steve? A deal that would ensure MSA would not publicly discredit Steve and LEOSU? In the beginning, MSA did everything they could to attack Steve including sending him a cease and desist order from their lawyers. Now they are completely silent. Maybe Glen could explain to us what has changed? 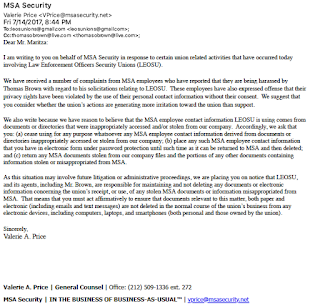