Steve Maritas and LEOSU have mentioned that we know nothing about the Service Contract Act (SCA). Steve is a self proclaimed SCA expert because he primarily represents security guards that work at Government facilities. The SCA only applies to contracts a company has with the Federal Government. The majority of MSA's contracts are with private companies which means the SCA does not apply to them. One of our members, Tom Brown, primarily works Federal contracts and began to notice that every other security guard at his post was receiving fringe benefits that they stated were "required." Tom began to do some research on the SCA and brought the issue to the attention of management.

When the talk of a union first started in July, management initiated their first round of post visits to ask handlers about their concerns. On July 27th, 2017 Keith Mulcahy visited Tom at 26 Federal Plaza in lower Manhattan. Keith asked Tom about any concerns he had about the company. Tom questioned Keith about the Service Contract Act and the associated fringe benefits required with working a Government contract. Tom posed the question to Keith because he's listed as a point of contact for Government contracts on the price schedule MSA provides to the General Services Administration. Who better to pose a question about Government contracts than to MSAs point of contact for Government contracts? Keith didn't see it that way. Below you can find Tom's statement he provided in his defense after Keith demanded he be disciplined for daring to question managements policies. This isn't the last time Keith and Tom have had a disagreement about labor as I'm sure many of you are aware. That's a story for a different day.

ALL OCCUPATIONS LISTED ABOVE RECEIVE THE FOLLOWING BENEFITS:

The Service Contract Act (SCA) is a fantastic law, unfortunately it only applies to contracts with the Federal Government. When Steve says he can have MSA apply the SCA unilaterally to every contract, it's just not possible. We have requested every city, state, and federal contract that MSA has through the Freedom of Information Act. The only agency capable of enforcing and recovering damages associated with the SCA is the Department of Labor, Wage and Hour Division. You can not sue MSA for SCA violations in court. When the agencies that do business with MSA respond to our FOIA requests, the contracts will be delivered to the Wage and Hour Division to be investigated for compliance. We're confident every contract MSA has with city, state, and federal Government agencies has a clause requiring them to furnish us certain fringe benefits. Below you'll find the clause in the contract for 26 Federal Plaza in NYC. 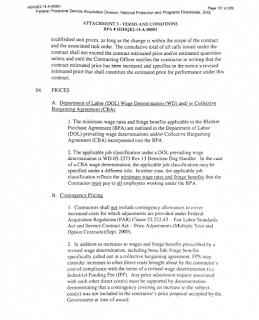 We predict MSA's response to this post will be that because our wages are higher than the prevailing wage rate for Detection Dog Handler, then their obligation to provide us fringe benefits has been satisfied monetarily. This isn't exactly true. It is possible for MSA to provide fringe benefits in the form of a cash payment, separate from our wage payments, for up to 40 hours a week, up to a total of 2080 hours a year. This method evenly distributes their obligation over an entire year. MSA cannot offset an amount of monetary wages paid in excess of the wages required under the wage determination in order to satisfy fringe benefit obligations under the SCA. This is confirmed in the Code of Federal Regulations, Title 29, Subtitle A, Part 4. The CFR can be found in its entirety here.

§4.170   Furnishing fringe benefits or equivalents.
(a) General. Fringe benefits required under the Act shall be furnished, separate from and in addition to the specified monetary wages, by the contractor or subcontractor to the employees engaged in performance of the contract, as specified in the determination of the Secretary or his authorized representative and prescribed in the contract documents. Section 2(a)(2) of the Act provides that the obligation to furnish the specified benefits “may be discharged by furnishing any equivalent combinations of fringe benefits or by making equivalent or differential payments in cash under rules and regulations established by the Secretary.” The governing rules and regulations for furnishing such equivalents are set forth in §4.177 of this subpart. An employer cannot offset an amount of monetary wages paid in excess of the wages required under the determination in order to satisfy his fringe benefit obligations under the Act, and must keep appropriate records separately showing amounts paid for wages and amounts paid for fringe benefits.

We sincerely hope Keith and MSA will take a second look at their contracts with city, state, and local Government to ensure they are in compliance. This includes the contracts they have with the City of New York and their four year, $95,280,190 contract with the Department of State in Winchester, VA.

You can find information on MSA's contracts with the Federal Government, including the amount of money they receive, by clicking here.
at 4/13/2018 05:31:00 PM